Aussies’ opinion of beer is changing, with research finding that more of us have a better understanding of what’s in the much-loved amber drop.

With 87% of Aussies unsure about what went into beer, and 73%2 wanting more information on the beers they drink, in 2015 Lion served up the beautiful truth about beer by adding nutrition information panels (NIPs) to bottles and cartons of its wholly-owned Australian beer portfolio, which included 887 million bottles (an Australian first) and launched the Beer the Beautiful Truth campaign.

Fast forward to 2017 and there are noticeable shifts in perceptions of Australians’ favourite alcohol, which Lion believes has been influenced by the ‘Beer the Beautiful Truth’ campaign and the introduction of NIPs. Armed with the facts, Aussies have started to shift their attitudes, with Lion’s new research finding that almost 40% of people believe that NIPs have helped them make more informed choices when it comes to choosing alcohol.

The research also found that, compared to last year, more people believe that beer is actually lower in sugars per serve (up 8%) than they thought previously; more Aussies also believe beer is lower in carbohydrates and calories per serve (both up 6%) than they previously thought and fewer people mistakenly think that all beer contains preservatives (down 8%).

Dr. Sam Hay, a Sydney General Practitioner and former doctor in the Australian Army, believes the campaign has been positive: “It’s encouraging to see that Australians are interested to know what’s in the alcohol they consume, that reflects a longer term trend that started with food and soft drinks.

“Of course, it is not only the sugars or the preservatives people should be aware of; alcohol should only be consumed in moderation and as part of balanced and healthy diet. Combining moderation with nutritional awareness is the key to enjoying beer, or any other alcohol, for that matter,” said Dr. Sam.

Earlier this year, Lion’s Beer the Beautiful Truth campaign announced its partnership with Good Food Month in 2017, which will showcase the versatility and vibrancy of beer together with food.

For the facts about beer, visit: http://www.beerthebeautifultruth.com/ 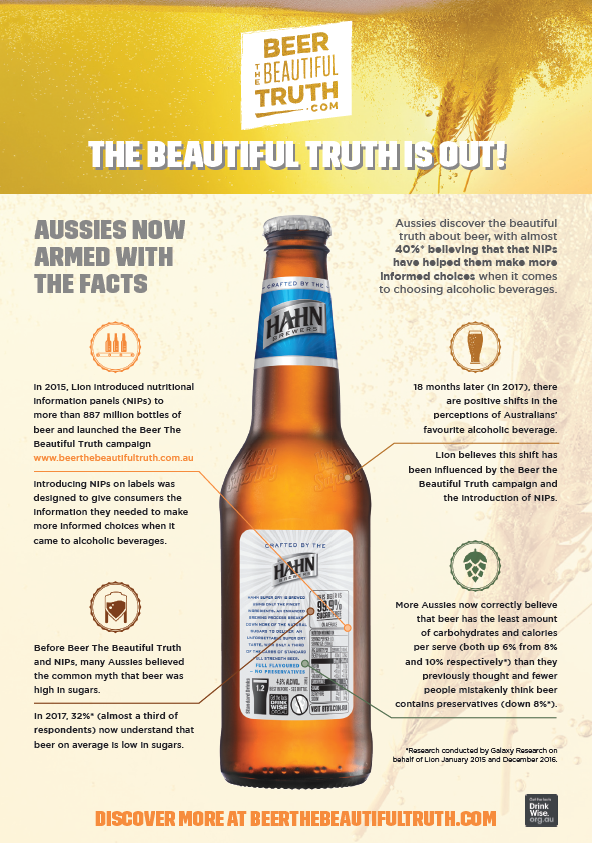